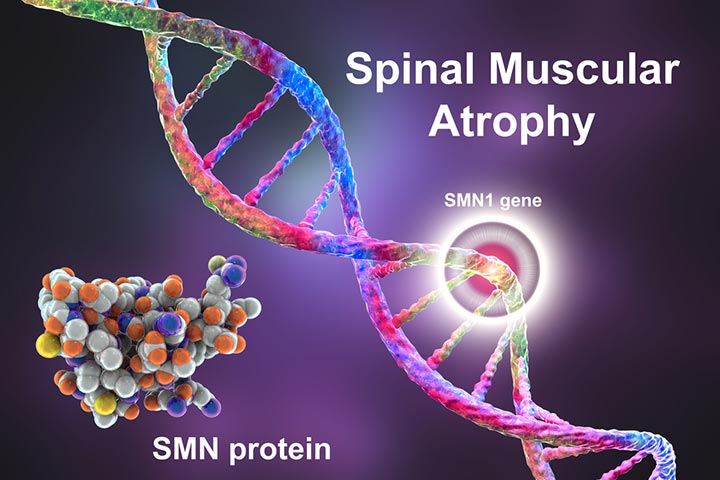 Spinal muscular atrophy (SMA) is a rare genetic disorder that causes loss of motor neuron function. Motor neurons are responsible for controlling muscle movement. The muscles of individuals with SMA do not receive nerve signals, causing the muscle to shrink and waste away. This is known as atrophy (1)(2).

Babies with SMA usually begin to exhibit SMA symptoms early in life, and the symptoms worsen or become prominent with time (3). Read this post to learn the causes, symptoms, and treatment of SMA in babies.

How Common Is SMA In Babies?

Types And Signs Of SMA

SMA is classified into different types based on the severity of the symptoms and the stage at which they are evident. Below are the signs and other salient attributes of different types of SMA (2)(5).

Note: SMA type 4 exists but occurs in adults, usually after the age of 35 years.

Causes Of SMA In Babies

People with SMA have a missing or mutated SMN1 or SMN2 gene. In most cases, they are missing a section of the SMN1 gene. Partial expression of the SMN genes leads to insufficient SMN protein, causing motor neurons to shrink and die. The brain and spinal cord cannot control skeletal muscles without motor neurons. The lack of nerve signals to the muscles causes them to experience atrophy, that is, they shrink and waste away. This condition is called SMA.

Pregnant women with a family history of SMA may go for prenatal tests, such as amniocentesis and chorionic villus sampling, to check if the fetus is at risk of developing SMA. These tests may be suggested if the healthcare provider notices poor fetal activity during an ultrasound scan.

If symptoms are noted after childbirth, the doctor will first perform simple tests and examinations to distinguish between spinal muscular atrophy(SMA) and other similar conditions, such as muscular dystrophy. To confirm the diagnosis, the doctor may order the following tests(6).

Management Of SMA In Babies

There is no cure for SMA. Certain treatment strategies work at making the symptoms milder and manageable, improving the baby’s quality of life. The doctor may suggest any of the following methods to manage SMA in babies, depending on their symptoms and type of SMA (7).

The baby’s healthcare provider may suggest a gene replacement or modification therapy. A common gene replacement therapy medication used in babies younger than two years is onasemnogene abeparovec known by its brand name Zolgensma. The injectable medication is made of a benign virus, which delivers the healthy SMN1 gene to the targeted motor neuron cells, improving their function. It eventually leads to better muscle control and health.

Risdiplam, known by its brand name Evrysdi is an oral medication that modifies the SMN2 gene to make it more efficient at producing SMN protein. An increased quantity of SMN protein improves motor neuron functions and muscle health eventually. The medicine is recommended for babies two months and older.

The baby may be recommended various physical therapies that parents may help perform. Physical therapy could consist of different exercises suggested based on the baby’s age and type of SMA. Some exercises may require parents to visit a professional who may perform the exercises with specialized equipment.

Braces and wheelchairs could be provided to the baby as they grow older to improve their quality of life. Appropriate nutrition through a customized diet plan could also improve health, making the effects of SMA manageable.

People with SMA experience progressive muscle weakness and loss of muscle control. It may lead to the following complications in the long run (1).

How To Prevent SMA In Babies?

If you or your partner has a family history of SMA, you may visit a genetic counselor. The counselor may recommend preimplantation genetic diagnosis (PGD), depending on your risk of having a baby with SMA. PGD involves profiling embryos for healthy SMN genes. PGD works in conjunction with in vitro fertilization (1).

Once an embryo with healthy genes is found, it is implanted into the uterus for pregnancy. Since the embryo has healthy genes, it negates the chances of having a baby with SMA even if you or your partner has a family history of it.

SMA is a rare disease and often causes lasting effects. Most cases are diagnosed during infancy and toddlerhood. The treatment strategies could vary based on the type of SMA. In any case, timely intervention could improve the outcome. Speak to your doctor if you notice signs of SMA in your baby.